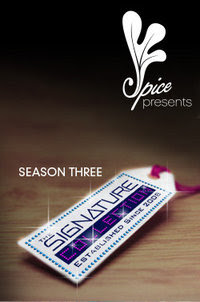 I just got a message on Facebook that the Mas Band SPICE is having their special Mas Band launch for Carnival 2011 on August 8, 2011 in Trinidad. Their theme for 2011 is THE SIGNATURE COLLECTION.

As you know my blog is about Trinidad & Tobago Carnival. One of the most important parts of the Carnival is the Tuesday Mas costume. How do you choose a costume? Well, first you have to choose a Mas (masquerade) Band. A Mas Band can be small (1-200 people), medium (200-1000 people) or large (1000-3000 people). The Mas Band is a group of administrators/businesspeople, designers, DJs and enthusiasts who want to create a Carnival feeling for their guests.

There are about 50 Mas Bands that participate each Carnival season! Some of the biggest bands are Tribe, MacFarlane and Island People. This year I played mas with the medium-sized Mas Band ‘Ronnie & Caro’. (By the way, R&C won first prize for the best medium-sized Band!)

Each year after Carnival finishes, the Mas Bands decide on a theme for their costumes. Once they have a theme, they decide how many Sections are needed. A Section is made up of a particular color costume that represents the theme. For example, the large Bands may have about 12 sections (12 different colors).

How do you know which costume or which Band you want to play with? You attend the Mas Band launch! It’s like a fashion show with a party and drinks!!
You can generally buy your costume online from the medium and large Bands’ websites (a few days after the Band launch).

Most of the Mas Band launches are between August and October for the following Carnival season. So costumes get sold out VERY quickly for the most beautiful costumes. So if you decide to join me at Carnival 2011 (March 1-11, 2011), you’ll have to let me know by mid-October.

The costumes in most medium and large Bands cost an average of $500 USD. This is an all-inclusive package which includes: gift bag, Monday Mas (casual) costume, Tuesday Mas (fancy) costume, drinks, water, snacks, meals and security.

I’m going to play mas with Ronnie & Caro next year but I will give you information about ALL the bands.